History of the Organization

A native of Bridgeport, Connecticut, William Chatlos was born in 1889. As a young man, he worked for a builder and lumber man and learned the craft of drafting house plans during night classes at the YMCA. He built his first house at the age of 17 and continued to build houses, apartment buildings, and office buildings in Connecticut, New York, New Jersey, and Florida until his death in 1977. 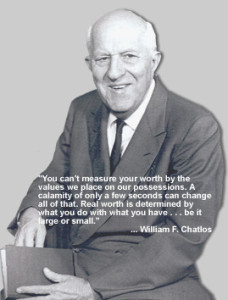 The Chatlos Foundation proclaims the Glory of God by funding nonprofit organizations in the USA and around the globe. Support is provided to organizations currently exempt by the Internal Revenue Service of the United States. The Foundation’s areas of interest are: Bible Colleges/Seminaries, Religious Causes, Medical Concerns, Liberal Arts Colleges and Social Concerns.

The Chatlos Foundation, Inc. is a private, philanthropic foundation and does not solicit or accept donations from the general public.